I am happy to say that this blog is finally being revived after a long hiatus. I thought I would first post my second movement of the Janáček Sonata since I wrote about the first movement, embarrassingly, way back in April.

The Sonata originally had three movements, but Janáček burned the third movement (a funeral march) shortly before the piece’s premiere in 1906. And apparently he wasn’t happy with the premiere, either, as he threw the remaining two movements into the Vltava river! He remarked about the score as it was taken away by the Vltava:

And it floated along on the water that day, like white swans

Janáček did regret his actions, so it is very fortunate that Ludmila Tučková – the pianist who originally played his piece at the premiere – eventually announced that she still owned a copy. Why she chose to wait until 1924 to say this, however, remains a mystery…

The second movement of the Sonata, following the “Foreboding” of the first movement, is appropriately called “Death”. As I mentioned in my previous post, the “death” referred to here is that of the worker František Pavlík. If the structure of this movement can be considered something like ABCA’ (first section, second section, third section, slightly different first section), then the death definitely occurs in section “C”.

You could consider my interpretation of this movement to be a little unorthodox. The “A” section, to me, conveys the mysteriousness of death, interrupted twice by violent thoughts. I play it very slowly, but I push the tempo much faster and become much more free during the “violent outbursts”. In the “B” section, I think, “Life is so beautiful, but… so very fleeting” and the tempo begins to feel more like walking pace. We also hear rumblings of something horrifying under the surface.

In the “C” section, Death arrives in all its glory – the entire section is marked fortissimo. Even the music looks frightening: 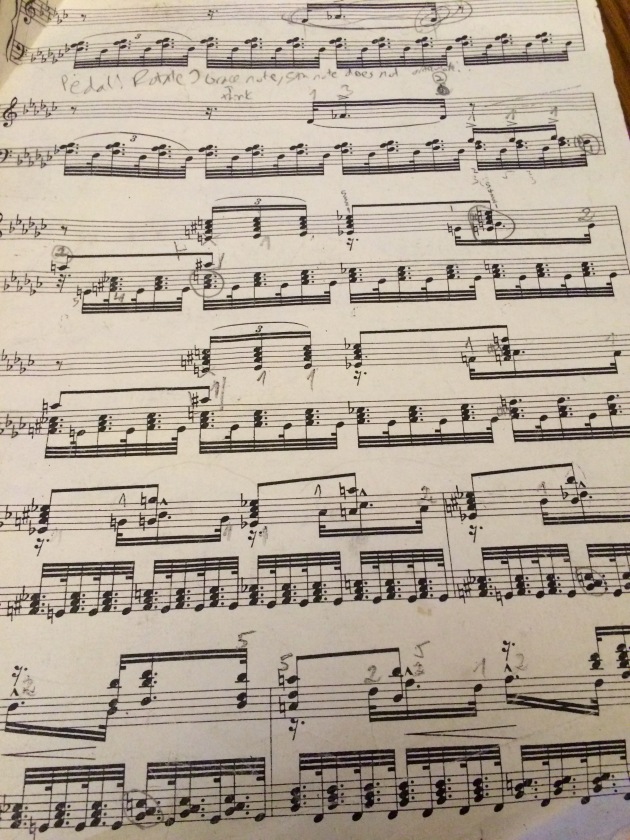 The music builds and builds in a terrifying frenzy until we arrive back at the theme from the “A” section, transformed from quiet and mysterious to dark, majestic, terrible, and cold. After the harsh arrival of Death, the music slowly begins to calm down, as if coming to grips with mortality after all.